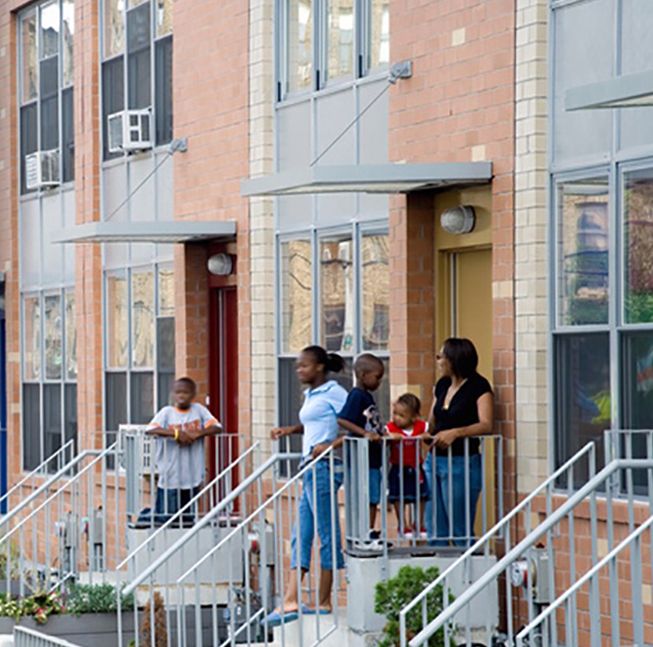 Quality Housing for All

The South Carolina Community Loan Fund, a state-wide community development financing institution, has been serving as an affordable housing advocate in the Charleston region for over ten years. Its CEO, Michelle Mapp, estimates that by 2020, the region’s growth will require 50,000 units of affordable housing units where the monthly cost burden is no more than 30% of family income. Current data from the regional competitiveness planning underway by the Charleston Metro Chamber of Commerce & Charleston Regional Development Alliance (follow the progress here) estimates that almost a third of the area’s mortgage holders and 53.6% of the area’s renters already pay in excess of this threshold, making Charleston’s one of the nation’s most expensive cities of its size for housing. According to a recent study on rental housing by the Joint Center for Housing Studies (JCHS) at Harvard University, “Rental housing is home to a growing share of the nation’s diverse households. But even with the strong rebound in multi-family construction, tight rental markets make it difficult for low- and moderate-income renters to find housing they can afford.”

The John D. and Catherine T. MacArthur Foundation website How Housing Matters, a collaboration with the Urban Land Institute’s Terwilliger Center for Housing, provides in-depth evidence on how quality affordable housing goes well beyond providing shelter. The evidence indicates that better affordable housing improves school performance, diminishes health problems for children and adults, and decreases psychological stress. And this recent New York Times article, speaks to recent studies indicating that providing housing in “opportunity” neighborhoods goes even further by securing better economic futures for disadvantaged populations. When you consider its implications on productivity, growth, jobs, education, and public health, affordable housing affects everyone; and, finding ways to fill the housing gap will require a significant comprehensive re-evaluation of the toolbox available to guide development by public and private entities and partnerships.

A spectrum of housing opportunities is required at all income and need levels in better neighborhoods – young and elderly, families and individuals, employed and dependent, healthy and disabled. Spartanburg’s (SC) Northside Development Group is making strides in redeveloping this small city’s north side, an area dominated by the once-abandoned infrastructure of a former textile mill and adjacent mill houses. In addition to constructing and renovating a range of housing for seniors, disadvantaged individuals and families, and a portion of market rate units, the area now features a healthy food hub, Harvest Park; and, an early childhood development center is in the planning stages. One unique feature in the development is a creek fed by an artesian well that had been largely paved over and piped. A grant from the Mary Black Foundation led to the identification of this creek and recommended its “daylighting” in a report by USC Upstate Watershed Ecology. This creek restoration project, named by the community as Butterfly Branch, is designated to receive funding as mitigation for wetlands disturbance that will occur in expansions of the runway at the local airport.

A more urban example of a multivalent approach can be seen through the projects of New York City’s non-profit developer Broadway Housing Communities  (BHC).   BHC has a 30-year track record as one of the nation’s most successful providers of innovative permanent housing specifically geared to individuals and families in the greatest need. BHC’s founder Ellen Baxter refers to every development as “supportive housing,” noting that each provides support services for tenants, such as medical and mental health care, vocational training, job placement, substance abuse treatment, and other types of training for independent living. Several of the buildings also include pre-school and adult educational facilities. A testament to the organization’s success is the recently opened Sugar Hill apartment building in West Harlem where 48,000 applicants were processed for 124 units of housing with 25 units designated for people currently living in homeless shelters.

As this example demonstrates – and the waiting list for affordable housing among the poor in Charleston is very long as well – demand far outstrips the availability of units. Matthew Desmond in his new book Evicted: Poverty and Profit in the American City notes that “Most Americans…think that the typical low income family lives in public housing or benefits from some kind of housing assistance, but the opposite is true.” The reality is that only one in four families who qualify for housing assistance receives it. According to Dr. Desmond, “We’ve reached a point in this country where the majority of poor renting families are giving at least half of their income to housing costs and one in four are giving over 70 percent of their income just to pay rent and keep the utilities on.” (see article here)  Marian Wright Edelman of the Children’s Defense Fund echoes Dr. Desmond’s observations here, noting that one potential solution to systemic poverty would be the expansion of  housing vouchers to households earning up to 150% of the poverty level, and who spend more than 50% of their income for market rate rents. The Children’s Defense Fund estimates this would reduce child poverty by 20.8 percent and lift 2.3 million children out of poverty.

But housing the homeless and the very poor are only part of the challenge. The most recent Pritzker Prize winning architect Alejandro Aravena of Santiago, Chile, sees housing as a real problem that will only grow in the next decades with as many as 40% of the global population in cities living below the poverty line or in substandard housing. He notes (here) that when land is scarce and/or expensive, the free market for housing tends to do two things: (1) the sizes of houses are reduced to such an extent that the quality of life may be undermined; or, (2) the people and families who currently occupy the available housing stock are bought out and displaced to the city peripheries where land is cheap, “segregating people from the opportunities that made them come to cities in the first place.” The first course describes the micro unit and tiny house movement that we’ve discussed in earlier blog posts (here) – recently touted in this Next City article. The latter is better known as “Gentrification.” For an incredibly deep dive into the gentrification of Brooklyn, NY, listen to the podcast “There Goes the Neighborhood” for an interesting and enlightening description of the process in action.

Strategies to address the panoply of concerns related to gentrification and displacement have begun to surface, and many cities are looking for more robust tools to promote the development of more housing options for individuals and families earning from 60% to 120% of an area’s mean income (AMI). The first two proposals in Mayor Bill de Blasio’s plan to create 200,000 units of affordable housing by 2024 were recently passed by New York’s City Council (articles can be found here and here). The first proposal is known as Mandatory Inclusionary Housing (MIH) which  establishes quantities and types affordable housing that must be included in new developments that require any type of variance. The second proposal is Zoning for Quality and Affordability (ZQA), providing specific zoning requirements and incentives for affordable housing development in every borough of the city. These ambitious proposals are seen by many other cities as the benchmark for future development of affordable housing.

Expanding the toolbox of cities to foster significant development of affordable housing is crucial. Charleston’s aspirations to create a vibrant, livable region will require tackling difficult systemic problems in this realm, including homelessness and gentrification. Advice has come from all corners such as this editorial written by former Charleston City Councilman Kwadjo Campbell with Rashida Jeffers-Campbell following on the heels of John Tecklenburg’s election as Mayor of Charleston.  In this article, Campbell points to immediate opportunities available to local government, such as: overlay zoning; incentivized zoning; a bond used to secure and limit use of available tracts of land; and, committed revenue streams to directed at providers of affordable housing resources.

A 2007 JCHS report  details a number of strategies that cities and states can use to increase affordable housing supply. In general, it is important to note that some issues, especially very low density and zoning ordinances designed to maintain them, decrease the overall supply of housing, especially multi-family housing, making rental and affordable housing more expensive. The most impressive results in the production of affordable housing can be found with mandated programs, particularly inclusionary zoning (IZ), such as that adopted recently in New York City, and linkage fees, where developers of non-residential space fund local affordable housing subsidy programs designed to bridge the gap between affordable and market rate housing rates. Linkage fee programs in Boston and San Francisco generated between $38 million and $45 million during the first ±15 years these fees were in place. Incentive programs such as density bonuses, fast-track permitting, and fee waivers represent another set of tools although the success of these instruments on their own have substantially less impact on the overall supply of affordable housing when compared with IZ or linkage fees.

Local governments also subsidize the production, retention and rehabilitation of affordable housing, mostly accomplished through state and federal resources. Federal block grant programs – CDBG and HOME – are more often the source used by local governments. Large metropolitan areas with high median housing values often add local resources to this federal funding, but smaller cities or metropolitan areas with numerous local governments generally do not or can not. Some state funding is available to cities in the form of  tax credits, but these have rarely been significant enough to address the need and in South Carolina these are generally directed to rural areas.

Some states limit what local governments can do. However, states can create inducements to the production of affordable housing through comprehensive planning processes – establishing “fair share” provisions, density mandates, and requirements for housing subsidy programs – or by encouraging local governments to establish inclusionary zoning or density bonuses. California, New Jersey, Massachusetts, Connecticut, and Rhode Island all have programs in place to stimulate the production of affordable housing. In Pennsylvania, the state has required local land-use regulations to limit exclusionary practices, such as low density zoning that does not allow apartments, as a counterweight to anti-density and “anti-snob” zoning practices. California has also mandated that local governments spend resources on affordable housing as a result of rising property taxes associated with rising home values.

Regardless of the path(s) chosen to meet the growing need for affordable housing, results can only come about through broad-based coalitions – including individuals, families, housing advocates, local government officials, legislators, and business organizations – that can agree on the need and the range of tools that are available to make affordable housing happen. Last year’s Supreme Court ruling on the Fair Housing Act was widely viewed as an opportunity for action on more integrative approaches to housing.

No single approach will solve the crisis, but it is critical that the need is recognized and addressed for the long-term.