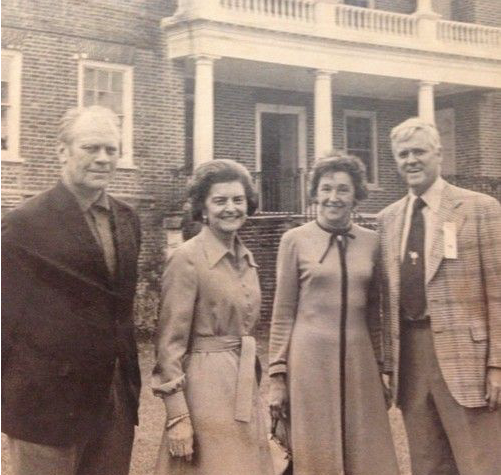 On February 2, 2017, If You Were Mayor co-founder Whitney Powers was honored by Historic Charleston Foundation as the 2017 recipient of the award for “Women Who IMPACT Preservation.” The festivities to announce and celebrate the honor occurred in the ballroom of the newly renovated hotel on Marion Square The Dewberry. Over two hundred people attended the event with proceeds directed to Historic Charleston Foundation’s Neighborhood Revitalization Initiative. This ongoing program has tackled such projects as the stabilization of the North Central neighborhood (read more here) and the creation of the Romney Street Garden. The following is a transcript of Ms. Powers’ remarks:

It is such an incredible honor to be standing before you this evening. I am humbled by Historic Charleston Foundation’s recognition. And I thank you all for being part of this occasion. I have been inducted into a club of real potency – joining the likes of past recipients Geona Shaw Johnson, Karalee Neilson Fallert, and Michelle Mapp.

And here we all are – Women – at a time that seems like a kind of re-recognition of the capital that we have always brought to the table. For Charleston, we can thank those who’ve gone before us – preservation leaders Dorothy Legge and Frances Edmonds, civil rights leader Septima Clark, and the abolitionist Grimke sisters. More broadly, there is Rachel Carson who prompted the regulation of deadly synthetic pesticides and brought about the modern environmental movement. I marveled at the film Hidden Figures and its portrayal of the contributions of Katherine Johnson, Dorothy Vaughn, and Mary Jackson – women who overcame race and female stereotypes as NASA mathematicians and engineers in the early U.S. space program. I look around at many of you who have started, or currently lead, many of this city’s vital organizations that advocate for a better city. And I see others of you who support and embolden friends and colleagues in infinite and unsung ways.

Sometimes things occur that remind us of our early invincibility and dreams. The recent death of Mary Tyler Moore brought to mind not only her iconic newsroom comedy and her best friend Rhoda – but also, for me at least, Marlo Thomas’ portrayal of That Girl and her smashing wardrobe. It wasn’t really a stretch to consider that I would be a fearless single, working woman from Mississippi who, in my 20s, found myself in Washington, DC, and, later, New York City.

I did not have a load of money, but it did not really require much investment to find like-minded people and feel empowered in those heady days of youth. By example, I joined those who protested against Royal Dutch Shell and its investments in apartheid South Africa and supported passage of the Comprehensive Anti-Apartheid Act. We had a voice. We were carried forward on a wave of sexy optimism. Within ten years, apartheid would fall apart and Nelson Mandela would be elected South Africa’s President.

So I landed in Charleston almost 30 years ago, with little sense of my own limitations. I readily engaged alliances with old friends and new. I founded an architectural practice following Hurricane Hugo. And, perhaps, I had a bit too much focus on rebuilding a re-imagined architectural legacy, while most in the city were a bit more interested in the caprice of transactional real estate development. Yet, I found that preservation informed my architectural interests on every level, and, I have been fortunate to work with a remarkable slate of knowledgeable consultants and talented staff.

But, this honor is only partly about my architectural contributions to Charleston. When I started IfYouWereMayor.com two years ago, it was really an effort to empower people to share ideas and issues in advance of a mayoral race that would replace a leader whose decision-making prowess was generally accepted practice during a forty-year tenure. The backbone was research done by my late husband Edwin Gardner on the various metrics associated with the concept of livability; and, the initial seeding and germination came from great organizations in Charleston that were advocating for facets of what makes a city thrive economically, socially, and creatively.

Historic Charleston Foundation was one of those organizations, along with the South Carolina Community Loan Fund, Enough Pie, Lowcountry Local First, OHM Radio, Lowcountry Maritime Society, Quality Education Project, Charleston Moves, Wings for Kids, Metanoia, Meeting Street Academy, Halsey Institute of Contemporary Art, Redux, Preservation Society, Coastal Conservation League, and Charleston Parks Conservancy. Over the course of the year-long campaign, our efforts found voice in numerous public forums with all or most of the slate of candidates. They certainly got an earful.

At this stage, the role in society of civic engagement could not be more critical. We now know that it is not enough to remain within the silo of any specific interest area – our collaborative voices are the only way to ensure that Charleston continues as a living, breathing city. Action comes from leveraging the voices of individuals and organizations that not only want to preserve, but to foster a future in the city – through its buildings, neighborhoods, local businesses, parks and green space, art, health, safety, schools, and connections. My work in this arena has reinforced my belief in the life of our city. Our work together must maintain diversity, promote innovation and economic opportunities, preserve our historic core, and ensure that social justice underpins our decision-making.

I am so proud of Historic Charleston Foundation’s commitment to a broad definition of “preservation,” and its efforts to promote connectivity, diversity, and authenticity in Charleston. Historic Charleston Foundation has been bold in its desire to look at the big picture of our region. They have offered capacity and voice to other organizations, and demonstrate a leadership that is the hallmark of what makes a city great. I could not be more honored than to be selected as the 2017 Woman Who Impacts Preservation.