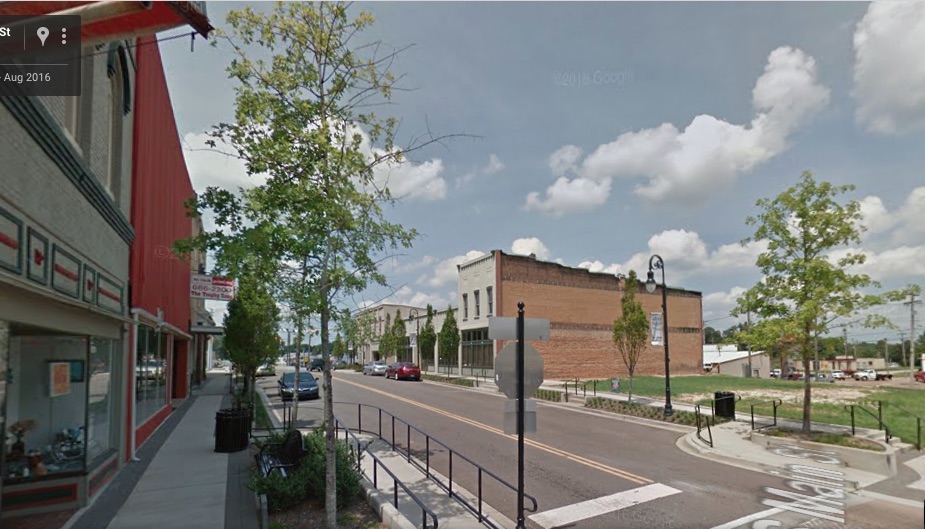 The Journalists Resource at the Harvard Kennedy School of Government (here) puts 1962 as year zero in the history of big-box stores. In the five decades since, the landscape of retail has changed significantly. Hundreds of small towns and larger cities have seen main streets suffer and tax revenues fall to below-subsistence levels. The research noted that fourteen retail establishments close, on average, within 15 months of the opening of a Wal-Mart. Even while many cities court big-box and smaller-box retailers in the name of economic development, research indicates that corporate commerce is associated with: “…increased obesity of area residents, higher crime rates relative to communities that were not by stores, lower overall employment at the county level, and lower per-acre tax revenues than mixed development.”

The 1970 scene of Main Street in my southern hometown (pop. 8,000) terminated at the high school – like a courthouse in the county seat. It seemed symbolic of a time when education was considered to be a way to better one’s self and one’s community. The local economy and the middle class benefitted from industries such as an ITT engineering unit and an Army Ammunition Plant (MLAAP). Downtown extended to the railroad with a few blocks comprising the business district – shoe stores, banks, menswear, small department stores, record shop, jewelers, boutiques, movie theater, café, post office. You could find most of what you might need or want without going far. For a kid on a bike, it was rather idyllic.

But the town’s major employers were affected by coming changes – digital eventually replaced touch-tone service equipment and MLAAP ended its manufacturing processes when acquired by a privately owned manufacturer of ammunition. A locally-owned bank (subsequently bought out by a national bank) replaced the school when a new high school was built on the town’s outskirts. By1980, the town was wishing for a McDonalds or a Wal-Mart to “put them on the map.” What the townspeople did not take into account was the inevitability that many downtown businesses would shutter as result and some buildings would fall into permanent disrepair until demolished. Many of the shops serving everyday needs and anchoring the downtown – clothing, jewelry, and small department stores – no longer exist.

The situation is not unique to the U.S. however. The New York Times recently covered (here ) the circumstances affecting European villages, zeroing in on the French town of Albi, an hour northeast of Toulouse. Vacant storefronts are scattered around the old center near the 13th century brick cathedral. “…Tourist shops and chain clothing stores are open, but missing are the groceries, cafes and butcher shops that once bustled with life and for centuries defined small-town France…[T]he decline evident in Albi is replicated in hundreds of other places. France is losing the core of its historic provincial towns….tangible evidence of a disappearing way of life that resonates in France in the same way that the hollowing out of main streets did in the United States decades ago.”

As is often the case when U.S. municipalities use tax incentives and other public enticements to attract businesses, Albi’s city leader’s had invested in a new cultural center at the town’s edge. A shopping mall and grocery “hypermarkets” followed. These were evidence of the sharp rise in living standards between 1945 and 1975, a period when consumer demand could not be met by the small, city-center shops. Now, the town’s historic core, with its souvenir shops and chain stores, is primarily a haven for tourists.

The anecdotal evidence of this phenomenon is vast, and a controversial 2005 documentary – Wal-Mart: The High Cost of Low Price (stream it here) – presents some compelling evidence of a number of these correlations and some efforts to, as the film points out, halt Wal-Mart’s march. But, with Wal-Mart employing 1% of the total US workforce, curbing its growth, and that of the other corporate retail establishments, to benefit local merchants can be virtually impossible without aggressive measures to gain widespread public support at the local level, as was done in 86 communities as of 1999 (noted here).

One other, perhaps even more critical, reason to counter widespread corporate retail is its affect on the livability of cities and towns. In 2006, the American Journal of Agricultural Economics published the first study (here) of the relationship between big-box retail and local community social capital. Economists Stephan Geotz, Ph.D,. and Anil Rupasingha, Ph.D., outline the significant impacts across many professions and businesses related to corporate retail’s footprint, specifically the supporting network of businesses serving the mom-and-pop retailers:

“…This industry includes firms in the legal, accounting, transportation, warehousing, logistics, financial, publishing and advertising sectors that work closely with the retailers. In particular, local lawyers, accountants and bankers provide essential support services for the mom-and-pop stores, and these individuals typically are community leaders. With the arrival of Wal-Mart, and the attendant reduction in the demand for their services, these people can leave the community to pursue opportunities elsewhere. In the process, the social capital – the leadership – they embody is destroyed, and their entrepreneurial skills and other forms of location-specific human capital are forever lost to the community.”

Local newspapers suffer from reductions in ad revenues. As Geotz and Rupasingha further note, “…Local stores may commission the design and creation of flyers for insertion into local newspapers and they may take out ads. Wal-Mart does not follow this practice. With local advertising revenues drying up, compounding the effect of the Internet, local newspapers become unprofitable, eliminating a source of livelihood for local opinion leaders….Thus, a reverse multiplier works its way through the community.

“Social interaction among local entrepreneurs represents an important venue for sustaining and enhancing embedded social capital. As shoppers drive to the outskirts where Wal-Mart is located to buy goods and services, downtown stores close and local cafes and restaurants see their customer base dry up. Opportunities for dialogue and interaction among local citizens may be reduced….” More in reference to this study can be found here.

In Charleston, keeping it LOCAL is becoming increasingly difficult with the influx of chain retail, pricey commercial rent, and connectivity concerns. One bright spot in particular is Lowcountry Local First, a non-profit celebrating its 10th anniversary this year. LLF advocates and cultivates an “…economy anchored in local ownership, because local, independent businesses are the cornerstone of our culture, economy, and character.”

Lowcountry Local First provides resources related to creating, opening, and maintaining a local business, as well as tools to market your locally focused efforts. The organization is also active in community development concerns, by helping businesses kickoff in a flexible, inexpensive co-working space (LocalWorks) and, eventually transition to permanent commercial space (Commercial Space Advisory Committee). LLF works hard to foster relationships within the public sector to promote the interests of locally owned businesses; and, in 2016, LLF’s Executive Director, Jamee Haley was recognized as a South Carolina Ambassador for Economic Development by Charleston County. You can join LLF’s efforts here to make local businesses a priority in the Charleston community.