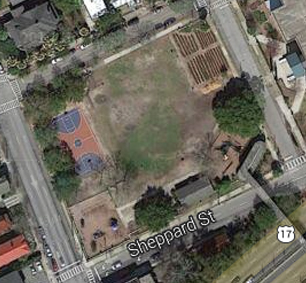 If You Were Mayor knows that cities benefit enormously from the energy, liveliness, and enthusiasm that come to neighborhoods when children are present.  Kids in cities are always amazed, and amazing.  Their curiosity is at its peak, and it does not take much encouragement for them to perceive the city as its own kind of amusement park.  Don’t forget that Walt Disney started with the idea of Main Street in his vision of Disneyland.

While large municipal parks, such as Charleston’s Marion Square or Hampton Park, London’s Hyde Park, or New York’s Central Park, often define the physical character of a urban landscape, it is the neighborhood playground, as a shared living/play room, that forms an important social anchor for families in neighborhoods.  Families and their friends meet in these outdoor spaces to play, socialize, and share in a unique, personal civic experience.

The history of the playground can be traced in some cities to a concern for the safety of children playing in the streets.  A 1901 study in New York found that more than 500 children were either killed or seriously injured by moving vehicles prompting the city to build its first publicly commissioned playground, Seward Park, in 1903.  This New Yorker article refers to the absolute mayhem that cut short the park’s auspicious dedication ceremony when 20,000 kids stormed past more than 200 police officers to get to the seesaws, swings, and sandboxes.   These early playgrounds focused on physical activity rather than fantasy, perhaps sacrificing imagination for exercise, and always featuring the “four S’s” – swings, seesaw, sandbox, and slide.

More recent playgrounds in the US have gone beyond just exercise and the installation of the more expected equipment (the “S’s”) with spaces that invite more imaginative play.  One approach has been through an arrangement of elements in the larger landscape that can be interpreted in a variety of ways, such as an expanse of sand, some water, a few climbing ropes, and a structure or tower.  In some parks, these fixed places are then supplemented by an array of “loose parts,” such as oversized blocks, that can be assembled in an infinite manner to create forts or rooms or castles or ships.

Charleston was not far behind in the early 20th century movement to create outdoor recreation parks for children and their families, and opened its first public playground in 1910 at 145 Fishburne Street.  It was (and is) known as Mitchell Playground, named after the nearby elementary school, and featured swings, monkey bars, and joggling boards.  During the era of segregation, this park exclusively served the African-American community while Hampton Park was reserved for whites.  Today, it has had a few updates along the way, but the turf is spotty where the soil is hard-packed.  Its 2-acres suggest that there is probably room for a “playground of the imagination.”