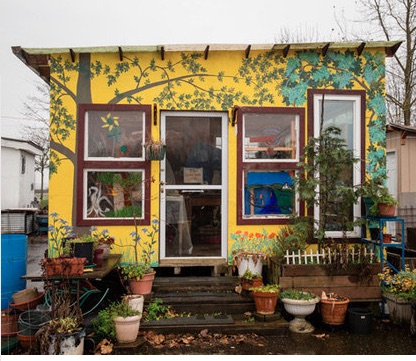 Life in cities and urban areas is characterized by a certain balance between private space and shared spaces, like parks, streets, shops, restaurants, and other public places. Most people who choose to live in the city can accept certain tradeoffs in their private realm (for instance, a somewhat smaller home or glimpses by the passerby to life through windows or gates). The appeal is the liveliness and amenities that anchor the sense of community.

One routinely hears the possibilities of “downsizing,” and there certainly appear to be trends in that direction (just consider the NYTimes bestseller The Life-changing Magic of Tidying Up by Marie Kondo). Initially, it may be that children grow up, leave home, and parents find that the suburban house echoes disconcertingly. So the furniture is parceled out to those offspring apartments along with anything else that merits a new home. Closets are cleared and unfinished projects purged. Favorite toys might be boxed for safekeeping, but most of what remains is tossed off. That condominium in a much warmer climate holds so much promise of the mythological life of leisure. But, even in the case of the aforementioned purge, there are still vestiges of the “old” lifestyle that seem to cling, whether it is the hyper-applianced kitchen or master bedroom cum sitting room.

But the history of the US demonstrates nothing short of outright ambivalence to the idea of downsizing (noting that the aforementioned book refers to a Japanese art). Opportunity brought many early settlers to these shores. And, a rather damnable tendency to civilize the wilderness, convert the heathen, and exploit our natural resources has consistently propelled belief in our Manifest Destiny, to expand on every available morsel of the continent, letting no one (especially those who might have lived here for hundreds of years) stand in the way.

In the 18th century, it was the lure of the frontier beyond the Appalachian Mountains, where trading and agricultural outposts were established beyond the original colonies. The 19th century offered up a duet of enthusiastic land-grabbing with the west coast. First, it was the discovery of gold that beckoned with the lure of riches. Then, the Homestead Act opened the great plains and prairie lands up to widespread settlement and cultivation in the aftermath of the Civil War. By the turn of the 20th century, audacious development fueled wild land speculation in otherwise off-the-beaten-track-places, like Florida.  And by the time that real estate bubble burst, the Great Depression throttled the country with downsizing whether it liked it or not.

The consequences of expansion in the 20th century may not have the human cost that marked our country’s earlier 200 years – given the fates of Native and African Americans – but the post-World War II period certainly created a rather blighted and downright ugly landscape. Cookie cutter houses in sprawling suburban developments spun out around old, forsaken downtowns, hailing the newly minted windfalls courtesy of Uncle Sam’s GI Bill (the modern version of the Homestead Act).

Unfortunately, many urban areas today are the skeletal remains of former lives, following periods of depopulation more or less driven by fear, whether as the target of nuclear destruction, unhealthy living conditions, or bastion of crime. Individual cars slowly displaced trains and buses, and the interstate highway system became the hallmark of progress. By the late 20th century, the greener pastures of remote suburbia were dotted with souped-up homesteads [sic] cheekily referred to as “McMansions.” A hodge-podge of strip malls, gas stations, fast food joints, and auto dealerships often lay between downtown and residential areas creating a barrier to mending the rift that may never be overcome in some places.

But, the pendulum does swing. And, the frontier has shifted right back to where things were years ago – many downtowns and city centers once again hold appeal in a turnaround that could not be foreseen even fifty years ago. The sameness of the suburbs just doesn’t hold sway like it once did, and the interest in unique places with distinctive character and liveliness has created its own kind of gold rush of speculation and fortune seeking. Cities are absorbing loads of migrants with their burdens of suburban tendancies that don’t really fit neatly into the compact demands of the urban metropolis. Downsizing is really called for, and a treatise of hints in that realm might start with the following:

Give up the two-car lifestyle. At its most recent meeting, City Council members were struggling to consider whether downtown Charleston residents might be happy with only a single car. “We are a car culture,” Daniel Island’s baffled member noted. “Remember the Boulevard in Mt. Pleasant,” was another call from a councilman, futilely trying to make a relevant point. Given that many people discover (or at least eventually figure out) that it is faster and more practical to walk or bicycle to most downtown locales, it’s a little curious why there is even an argument in this beautiful, compact, and historic downtown. Granted, public transportation is wholly inadequate at this stage, but there are some enterprising efforts to fill the gap, such as a “free” car service called SCOOP, and an intermittent water taxi that really is an opportunity.

Small is the new black. Some people actually prefer the idea of living small in the first place – no annoying routines of upkeep nor are there worries about fostering a tendency to accumulate unnecessary “stuff.” And there are others who want to stay light, nimble and ready to move on as an essential part of youth and the esprit d’aventure. Some places have embraced this notion, providing groups of tiny houses and accompanying services for homeless people and families. A dissertation from a graduate student at MIT, and articles from The Atlantic, Huffington Post, and Charleston City Paper, offer some hints at the possibilities for tiny houses to provide shelter, and what may be on the horizon for homeless families in Charleston.

Perhaps downsizing, in this sense, is really more a sign of the advent of maturity. If we consider that the sameness of chain stores and franchise restaurants was symptomatic of our adolescence – a time when we wanted to be more alike – then, this stage actually underscores how our differences are what creates value, appeal, and real community. It just may be possible that we have the opportunity now to leverage our “downsized” resources to benefit everyone, by focusing on the important, and unique, characteristics in a city like Charleston that can make it more livable and accessible and beautiful.

And, then, who would want to leave?